From Biographies
Jump to navigation Jump to search

He took his family from a poor mining town on the Wales / England border to the USA and started a new dynasty of professional and well-known Mucklestons.

Early years in the UK

Edward was born on 13th September 1802, in Trefonen near Oswestry, Shropshire, England but just over the border in Wales, the son of Edward Muckleston and his wife Alice (nee Roberts)[1]. He was baptised on 3rd October 1802 at St Oswald’s Church, Oswestry, Shropshire[2]. His father was a collier and the area where they lived was very much a mining community[3]. Edward was one of eight children (his father married twice) but all his siblings died in infancy.

Edward also became a collier in the Trevonen mines in Wales. His father died in 1831[4] and his mother in 1834[5]. His father was 77 when he died and being the only child, the onus was probably on Edward to take care of his parents as they aged.

It was at the age of 37, on 20th April 1838 before Edward married in Oswestry. His wife was Anne Edwards the daughter of John Edwards a farmer. In the register Edward was recorded as living in the parish of Llansantffraid which was near the village of Llanymynech in Wales, and he was still working as a collier[6]. As Edward signed the register it is likely that he was reasonably educated.

They travelled to America from Liverpool aboard the Carolina, for New York City.

The immigration documents for New York records the family Edward age 40, Ann age 40, Allen age 6, Alice age 4 and John age 2, and as being from Wales[11].

From there they travelled by river boat to Buffalo New York, via the Hudson River and Erie Canal. From Buffalo they travelled on a Great Lakes Ship along Lakes Erie, Huron and Michigan arriving on dry land once again at Racine Wisconsin. Continuing to travel westwards they finally settled at Waukesha Wisconsin which was a Welsh farming community[12].

The family spoke Welsh[13]. On 20th July 1848 their family was completed by the addition of their youngest son Edward Edwards Muckleston[14].

Edward turned his hand to farming and acquired a plot of land in Delafield Township, Waukesha, Wisconsin.

It would appear that Edward found a lovely spot to farm and built a nice homestead for his family. In 1991 descendants of Edward and Anne, Mel and Clar Forde, visited the farm and sent the following description back to the family:

"The farm is now owned by the University of Wisconsin-Waukesha. It is an immensely big place which now has two furnaces in the basement to heat it. Now the house is vacant without furnishings. To bring it up to modern codes would be extremely expensive. It even still has a copper bathtub. It is totally un-insulated and would take an enormous amount of improvement to make it liveable. While it is a novelty that could be made into something of historical significance it must also be recognised as being just a big old farmhouse. It has four bedrooms on the second floor but each one is at least twice the size of a modern bedroom. There is an attic that had some kind of little room in it and the height to the peak must have been at least 16 feet. The basement walls seem to have been mortared stone with a facing of cement put on them later on. There are two stairways going upstairs, one from the living room and one from the kitchen area. The shack must have been the hired hands domicile. The old farm would have been a developer’s delight as it is on a knoll with views down the valley."[16]

I now understand that this delightfully described old farmhouse no longer stands. The couple had clearly picked a lovely spot to settle. 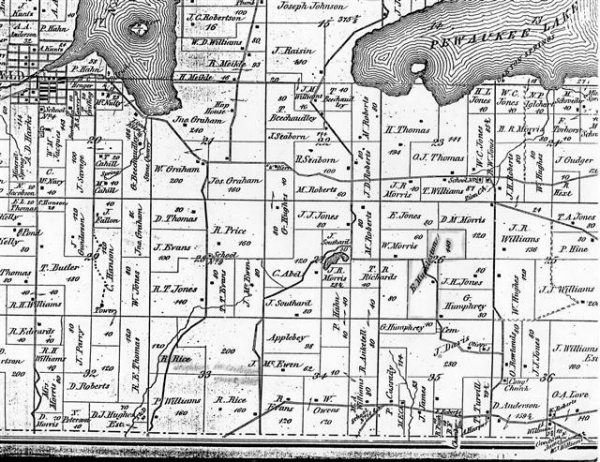 Indexes are transcribed as follows

also as above with following changes:

As can be seen from the above map, the youngest son Edward Edwards Muckleston was to take over his father’s farm.

The Civil War was to impact the family, insomuch that eldest son Allen enlisted in the Wisconsin Infantry on 22nd August 1862[18]. John was also to enlist but only served from March to August 1865[19]. Both fought on the Union side. Thankfully both returned unscathed.

By 1874 his sons Allen and John, having married sisters from the same farming community in the 1870s, had struck out on their own as farmers[20].

For some years Allen and John farmed together, John then moved to Seattle but was not particularly happy with city life and returned to Wisconsin for some years and ran a boarding house with his wife. He later returned to Washington State[21].

Younger son Edward remained at home and was to inherit his fathers farm. Edward junior did not marry until 1886, after his father’s death[22].All three sons did well as farmers winning many awards at county shows and playing their part as members of the church[23].

Although Edward first petitioned to become a US citizen on 5th April 1847 it was 16th April 1873 before the final step was taken[24]. The reason for the delay is not known. 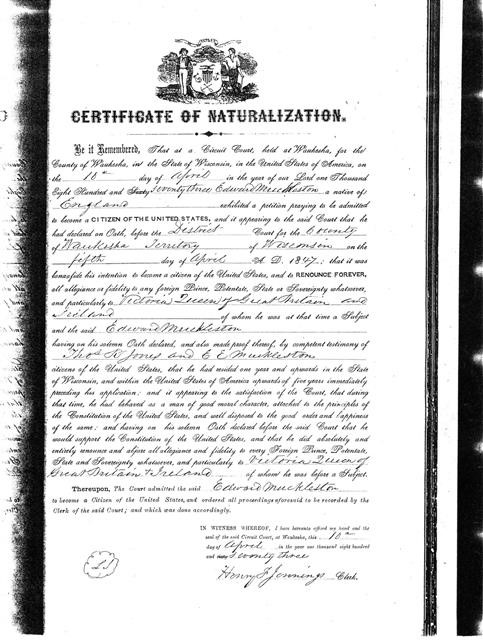 After almost 39 years of marriage Edward was to sadly lose his wife Anne on 7th April 1877[25]. Daughter Alice had never married and in April 1884 she was taken by the Sheriff to Oshkosh Asylum for the insane where a few days later, on the 16th April, she dies[26].

For the last year of his life Edward alternates between living with his two eldest sons Allen and John and on 21st October 1884 age 82 he died[27]. On 23rd October he is buried in Salem Cemetery, Wales, Waukesha, Wisconsin[28]. 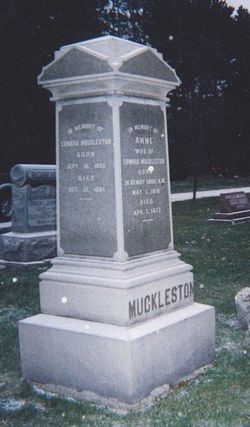 Edward's Memorial with his wife's details on the front

Edward’s tombstone states his year of birth as 1801, however the Oswestry Parish Registers confirm this as being in 1802[29].

As Edward and Anne had obviously prospered in their new life so did their many descendants who became noted lawyers, teachers and civil engineers as well as making their names in other areas such as athletics and aviation. They also played their part in the World Wars.